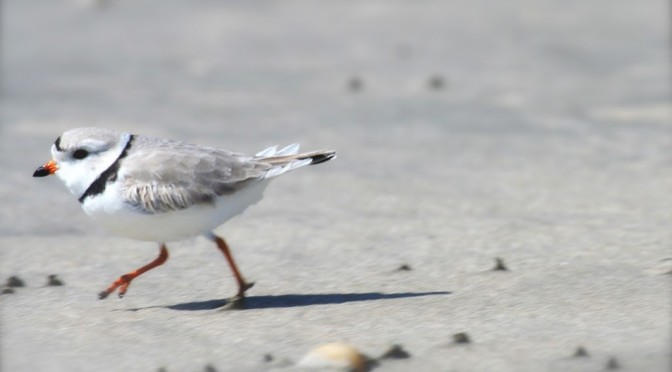 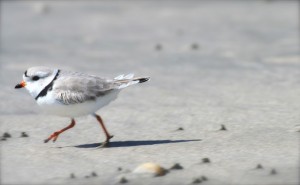 The Piping Plovers that nest at “B” Lot and other oceanside beaches at Sandy Hook do so under almost ideal conditions, at least until Memorial Day Weekend, when beachgoers arrive. 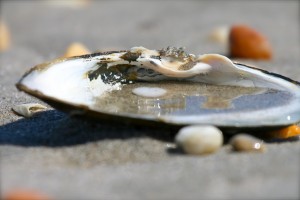 Before then, they court, bond and set up housekeeping in relative isolation. Clamshells and pebbles populate the landscape; bits of driftwood and beachgrass offer them cover. 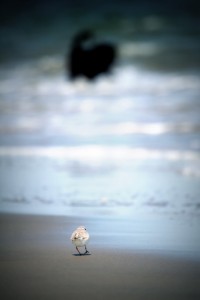 Save the occasional wayward Lab that can’t resist a dip in their private ocean.

(Dogs are not allowed on oceanside beaches during nesting season. Many people ignore this rule.) 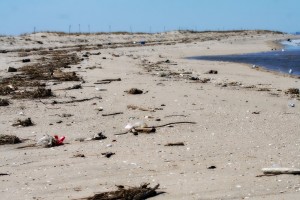 The northernmost tip of Sandy Hook, by contrast, is like another world… beachgoers rarely wander this far; the beach outside the plovers’ protected nesting area is littered with debris… 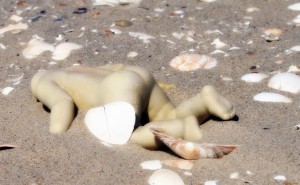 Piping Plovers, Least Terns, Skimmers, Oystercatchers… they all nest here, in privacy, in the middle of the garbage that washes, butt up, on their doorstep. 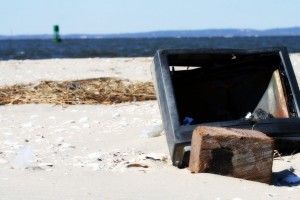 Far above the tide line, they carve out their nest scrapes among the scattered wrack and shells; they shelter their young in the shadow of discarded tv sets… 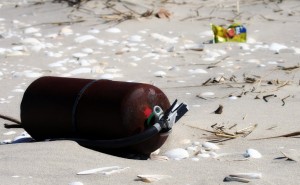 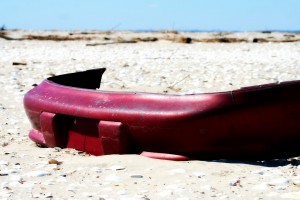 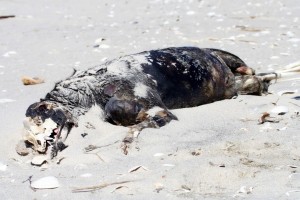 (I never did find any Plovers here… but the 8-10 reported recently had plenty of places to hide!) 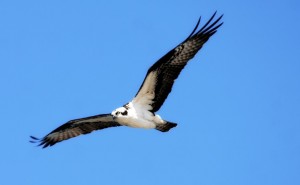 I think we owe them better; I believe the cost of privacy for endangered and threatened species shouldn’t be as high as this!

Every bit of garbage ends up somewhere… we all know this. A lot of NYC trash ends up at Sandy Hook. This needn’t be so.

Clean Ocean Action sponsors regular beach sweeps… the next at Sandy Hook is scheduled for April 30, 2011!

(Our newly returned Osprey will thank you for a more beautiful landscape over which to hunt flounder!)

Piping Plovers deserve at least as clean a beach as we expect for ourselves, don’t you think? 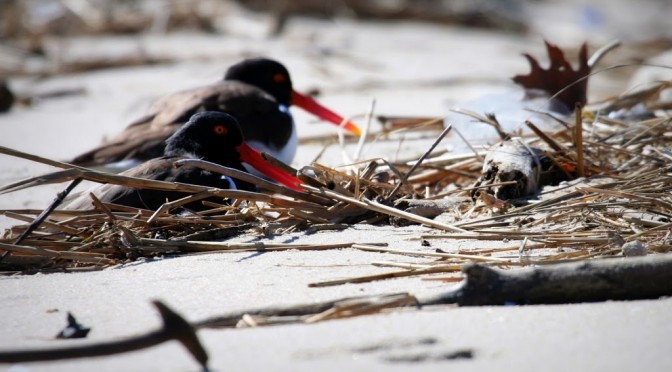 Oystercatchers are funny birds; so boldly patterned, their calls so strident, yet they’re so shy!

You wouldn’t think it, but you could easily walk past an oystercatcher without noticing it. Except that they give themselves away at the very last second.

Their nerves get the best of them when what they really need to do is stay put and stay quiet! Instead they advertise with loud calls and bright bills.

All afternoon today I was pushing a pair ahead of me as I wandered at Sandy Hook looking for Piping Plovers. 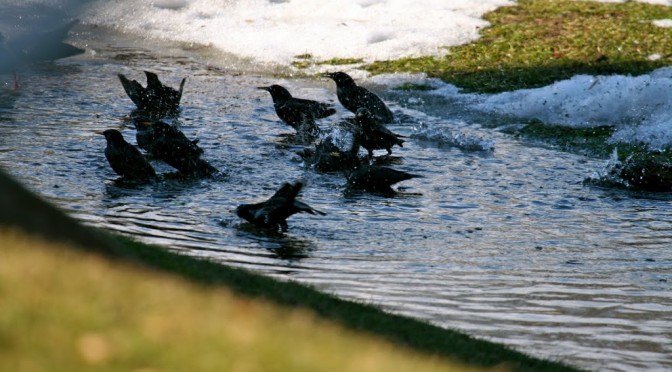 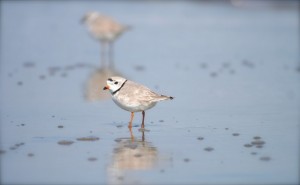 Did you ever chance to hear the midnight flight of birds passing through the air and darkness overhead, in countless armies, changing their early or late summer habitat? It is something not to be forgotten… You could hear “the rush of mighty wings,” but oftener a velvety rustle, long drawn out… occasionally from high in the air came the notes of the plover.
–Walt Whitman, Specimen Days

The warming March sun and a faintly whistled “peep lo” lured me to Sandy Hook this weekend to greet the newly arrived Piping Plovers. Courting Woodcock the evening before, an Osprey making a bee-line up the coast and the season’s first Phoebe completed the day. 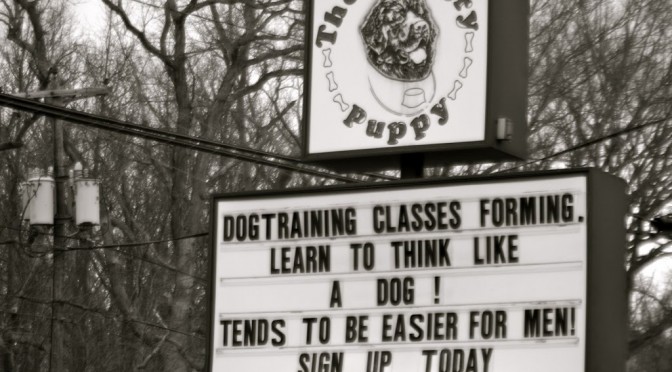 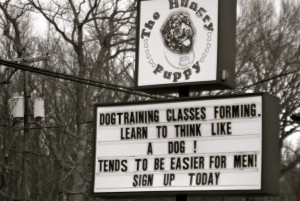 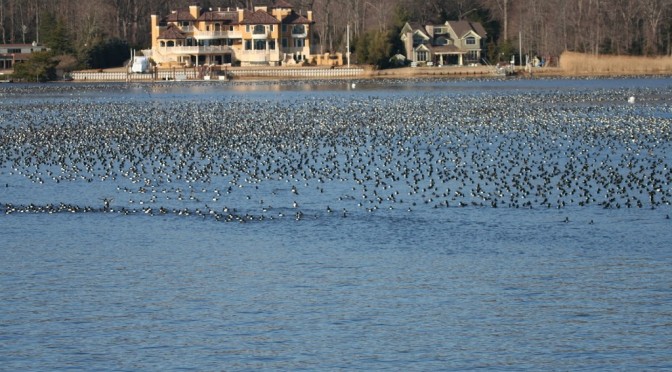 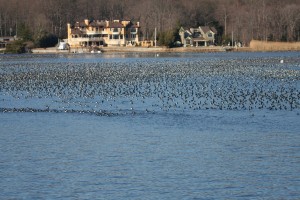 So there’s been this huge flock of Scaup resting at the base of the Oceanic Bridge between Rumson and Middletown the last couple weeks… quite the spectacle for local folks who never pay attention to such a thing.

Busy with tennis and lunch dates, you know.

I was glad to find people there, glad to find “normal” people curious about this big conglomeration of ducks that seemed to appear from nowhere.

The great mass of them were Scaup sp. with a couple Red Heads mixed in, Brant and Ruddies at the fringes of the flock. 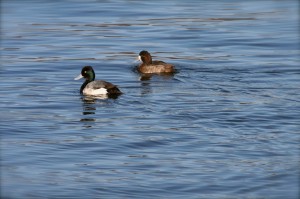 While I “know” that these are mostly Greater Scaup, I wondered what wisdom Crossley might have to offer…

Greater is known to form large flocks in winter in coastal estuaries.

Sometimes obvious, but at other times separating from Lesser a real head-scratcher.

(one hardly needs to pay attention to the bulgy cheeks of the Greaters that Crossley mentions!)

I’m enjoying sorting through the local waterfowl with the new Crossley Guide… have you bought a copy yet? What do you think? 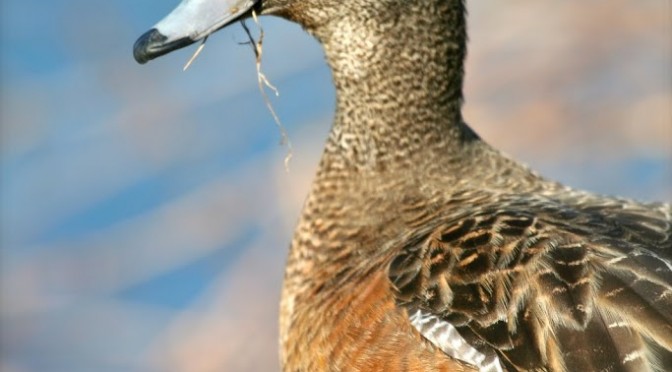 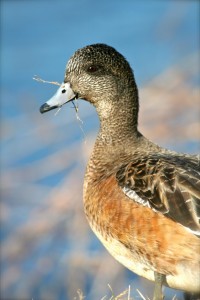 It’s been a great couple of days to be a duck!

I shot this female wigeon on a much bluer day, feeding in the grass beside Lake Takanassee. 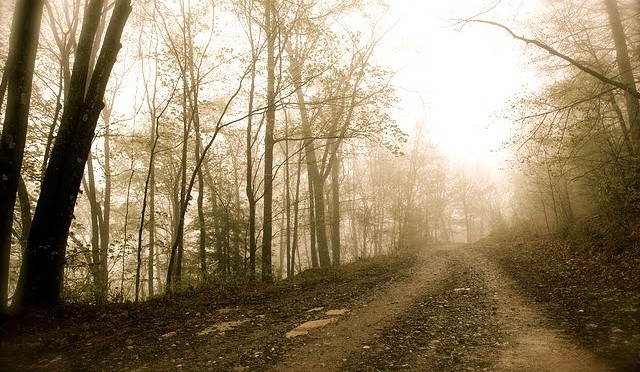 To some, the mention of West Virginia conjures images of moonshine, hillbillies and mountains leveled by coal companies. The string of small, almost threadbare towns one finds tucked into the hills in the southern part of the state only reinforces the reputation of the place as somewhat benighted.

Yet I keep wanting to go back.

There are no life birds for me there. As a birder, you can understand the equation necessary between limited travel funds and the possibility of life birds added to one’s list.

Birds are not really why I go.

There’s some other appeal in the homespun spirit of the New River Birding and Nature Festival that draws me back late each Spring. It’s run in such a way that it does end up feeling like summer camp for birders, as Bill Thompson says about it. It’s funny to me now to remember a similar feeling before I ever even went to this festival for the first time.

The field trip groups are kept wonderfully small; intimate, even, compared with most popular birding festivals. The trip leaders, besides being experts, are personable and enthusiastic and actually learn your name. Profits from the festival benefit local schools.

These are important things in my book.

This is the perfect festival for The Flock, too. They spread each of us out among the daily field trips – probably so that no one group will be subjected to the bunch of us together – and give us the chance to spend evenings together at dinner and the presentation. Then they secret us away for the night in a farmhouse in the middle of some marsh where no one can hear our silly antics.

I’ve made lifelong friends there. I’ve seen gorgeous birds and beautiful sights shrouded in mist. There are hillsides drenched in wildflowers. There’s biscuits and strawberry jam at every breakfast. A porch swing and Susan.

Is there any wonder why I go back?

There’s still a couple openings for this year’s festival… join us! If not this year, do put it on your list for someday soon.

(and, for the record, I too love the “city of lights” along the Turnpike mentioned at 5:10!)