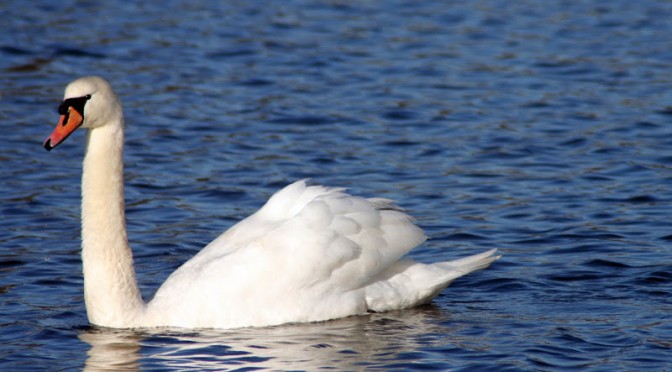 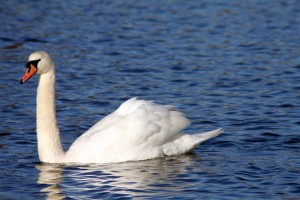 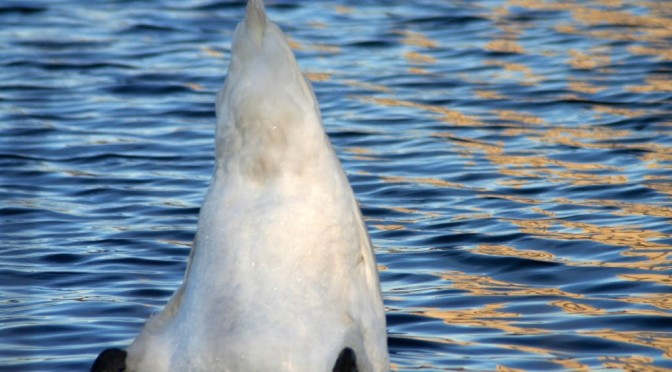 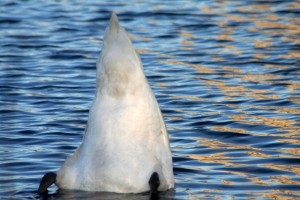 Bottoms Up – can you name it? 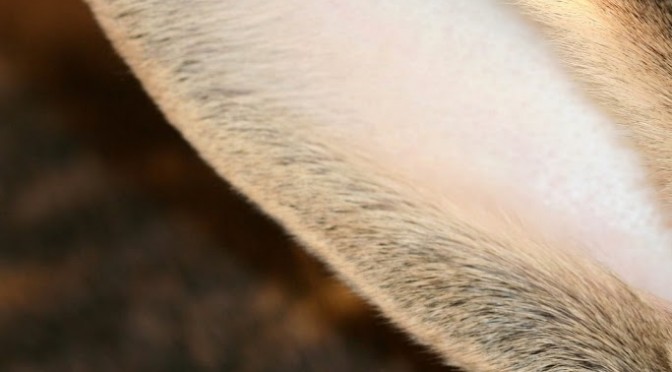 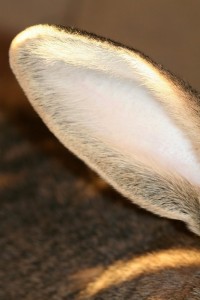 The low light caught the velvet fur of Boomer’s ear while he dreamed bunny dreams late this afternoon. His sleepy eyes smiled at my hand against his nose… and he nudged me… a persuasion to again run my happy hand through his dark coat.

I don’t pick out sweet rabbits; they don’t come here silly, jumping figure-eights at my feet. They’re dumped, neglected, frightened. Or worse, like Boomer and some of the others here, sent to slaughter. I pass by that slaughterhouse on my way to work most days and wonder how many others come and meet their death in that place without ever knowing a gentle hand. I look away of course; I don’t have the courage to see what actually goes on there or to do the really hard work of going in and choosing which rabbits to rescue. But I’m glad to be able to support a local rescue that does.

Boomer is a survivor! A Flemish Giant, bred for show but not perfect, so he was sent to slaughter and netted his breeder about $10. His sister and companion, Cricket, passed away last May. A new slaughterhouse Flemmie, Sunshine, found her way to me shortly thereafter and has slowly worked her magic on Boomer’s broken heart. The big news here is that finally (after 6 months!) the two are spending the night together. 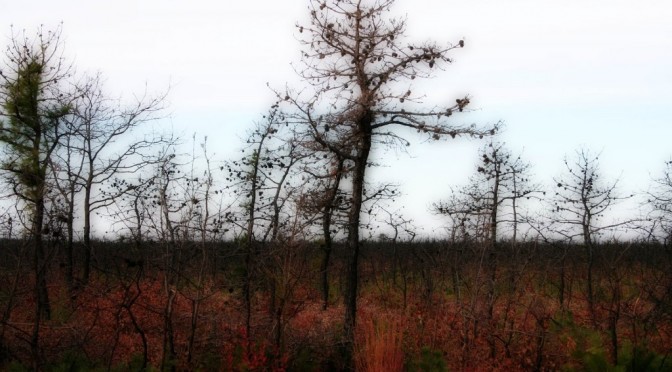 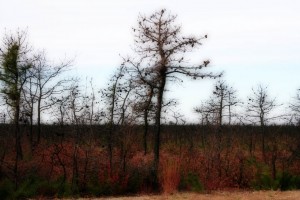 Firstly, get out your granny glasses because the type on this page has gone all wonky again. Why does Blogger do that?

In addition to the fire tower incident on Friday, I finally drove far enough south to see some of the damage from the Warren Grove fire back in May. There’s a gunnery range there and well… an F-16 dropped a flare during target practice that set fire to 15,000 acres or so. Oops! It all ended well, with no one hurt, and the pines got a taste of fire again.

I took this pic along Rt. 539 and you can sort of get an idea of what the pine plains are like – those are dwarf pines growing in the distance – stunted and twisted from the dry, sandy, nutrient-poor soil to reach no more than 10 feet tall, but mostly they’re shorter. The trees grow so closely together so as to be impenetrable, but here or there is a way in.

It’s worth looking for an opening because there’s a subtle beauty to the plains. There’s pleasure in the absence of people and the stillness. The soil underfoot crunches with reindeer lichen and if you 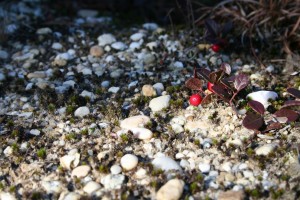 ‘re patient enough to look for it, there’s bearberry, a neat little arctic plant that stayed behind when the ice retreated.

I didn’t spend very much time that day, mostly I was in a hurry to be somewhere else, but it was a worthwhile detour. I think my favorite time to visit the dwarf pines is in the middle of winter with a cover of snow and the company of a few chickadees searching the pine cones for a tasty morsel. 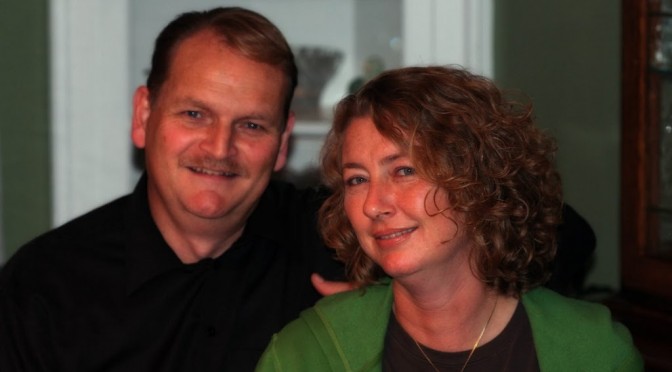 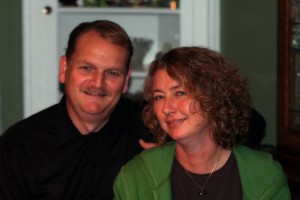 The pic has nothing to do with this post, exactly. Just my brother Kevin and I the other day after a pomertini or two. (Pomertinis are healthy and full of antioxidants, you know, or at least that’s what my SIL said when she kept pouring them!)

Anyway, maybe it was the vodka, but at some point on Thanksgiving we got to talking and laughing about Christmas and gift-giving. Kevin has a way of making everything funny, yet the gist of what he said was pretty depressing. Each of us, in my family anyway, spend an awful lot of time stressing about Christmas and wasting money to buy each other stuff we don’t need. We all make enough money. If we need something (or heaven forbid want something) we buy it for ourselves. Simple as that.

We wised up somewhat with gifts for my dad before he passed away. For a few years we rented a big stretch limo to take the bunch of us into NYC for dinner and a visit with the Rockettes, each of whom my dad was (not so) secretly in love with. Those gifts weren’t about money, but instead time. Time spent with his kids and grandkids doing something that made him happy. Much more meaningful than a silly tie or gadget for his computer.

We often talk about doing something similar for ourselves. Just planning a day to do something fun together, rather than buying gifts, but we always cave in and end up at the mall in a frantic dash with the rest of humanity. Hard to resist, I guess.

So… I’m hoping to be spared the craziness this season. I just need to come up with some ideas for things we might like to do together. And I need lists for the kids… cause they shouldn’t be spared and no Christmas is complete without at least one awful afternoon in a toy store. 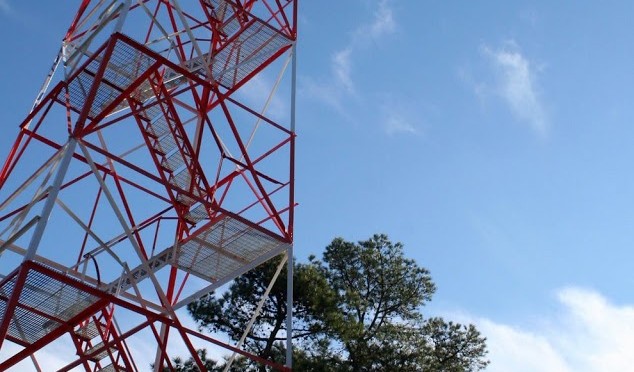 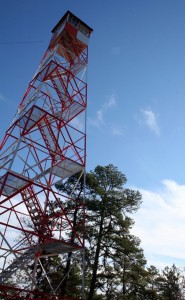 Wandering around the Pine Barrens today looking for a Northern Shrike or two that have been reported, I came across Apple Pie Hill. It’s supposed to be the highest elevation in Southern NJ (at a whopping 209 feet above sea level) with a terrific view of the Pinelands. I’d always thought you had to hike in on the Batona Trail to find it, so hadn’t worked up the courage to try it alone yet. I often get lost (every darn road down there looks the same – sugar sand and pitch pine – how can you not get lost!), but as often happens, I stumble across something I’d been meaning to find at one time or another.

Anyone care to guess how far up those rickety stairs I got before having a panic attack? Vertigo to the point that I was afraid to move? Very weird. The wind and the dog barking from the car below didn’t help any. 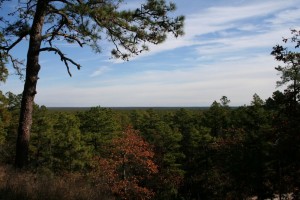 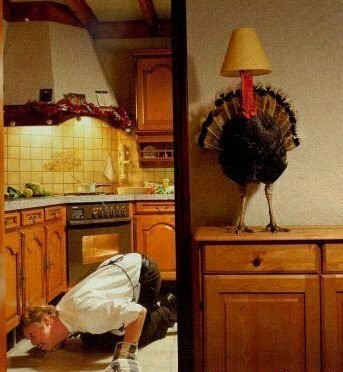 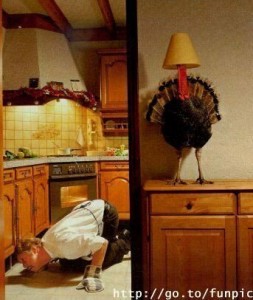 I’m off visiting at your places tonight; but thought I should at least give you something to laugh at here. Have a happy tomorrow! 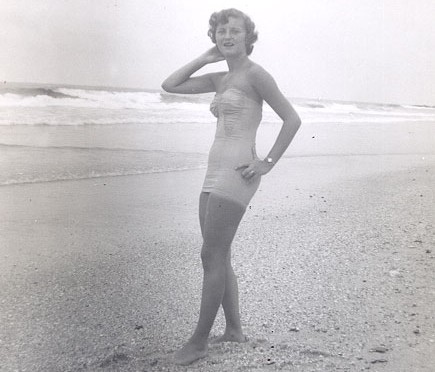 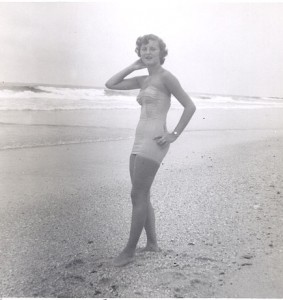 Despite what I love to tell people to the contrary, I do sometimes wish I had a mother to tell me what to do.

I lost my mom when I was just 11, so it was up to my dad and big brothers to look after my growing up. I’ve had to make do with snippets of female wisdom garnered wherever possible, be it from a neighbor or one of my brother’s girlfriends, for most of my life. A lot of the people I might have expected to be there for me as a kid without a mother never were. I like to think of that as a testament to their confidence in my father, rather than proof of their indifference to me.

I figure I turned out to be a pretty good person, but wish someone had taught me to cook and iron and manage laundry properly. My mom must have done those things for my dad, so he had to fend for himself, too, when she passed away. He did his best to learn quickly and even managed to cook for us and was quite inventive in the kitchen. I remember just one occasion that might be considered a *cooking lesson* and it involved pie dough and a rolling pin, and a lot of yelling and cursing. Can anyone make a pie crust without cursing? Anyway, I sometimes feel that I lack a certain finesse for things feminine as a result. Shopping, decorating, hair and makeup – I’m clueless.

The older I get, the more I see the influence of my father in my personality and way of being. I blame him for my obstinacy and tetchiness. These I consider good, strong traits in myself, but I never thought of them that way in my dad. Oh he was stubborn and could hold a grudge for ages! I may be the picture of my mother, but underneath I am all my father, like it or not.

I’ve been blessed since adulthood by a few older women friends who’ve taken me under their wing when I needed help or guidance, or just needed help in learning how to do something that comes *naturally* to other women. Carol who taught me to tie pretty ribbons on packages and how to crochet, Joan who listened to me bawl and complain as a first-year teacher, Merry who modeled a life of quiet wisdom and acceptance, Kathy with her urgings to be independent and carefree in my love for the outdoors, Linda who shares recipes and beauty tips.

These may be little things in the making of a woman, but are important to the sense of self and to fitting in among other women. That’s not ever been easy for me and for the most part, I won’t be bothered with it. (There’s that obstinacy, again!) I often wonder though what women cherish about their relationships with other women and with their mothers. I wonder if it’s the same things that the tomboy in me as a child saw with such wonder.

I’m sharing another of what my brother calls *cheesecake* shots of my mom. Looking at her there, I’m reminded of something else I never learned: confidence in a bathing suit! 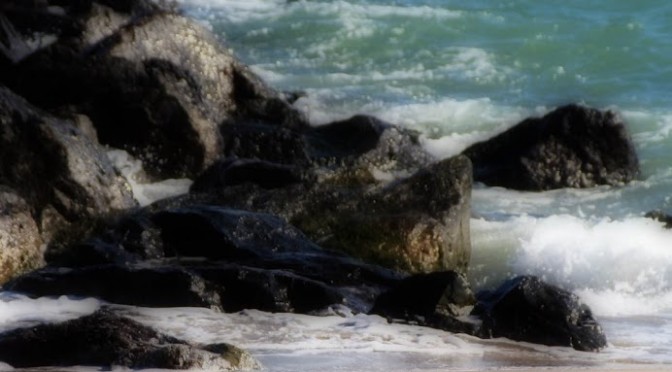 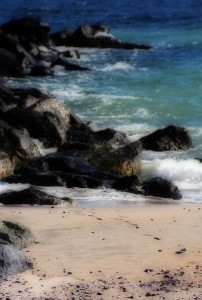 If spring is born at the river’s edge and the burning summer in the dust of the highway, then where do we discover fall?

Is it in the mothball-scented chests where the blankets are kept? In the hedgerow that vibrates with migrating birds? Or do you find it, like me, in the darkening sea and the immense sky of an October afternoon. Or in the dunes, scattered among the quick sweep of goldenrod.

I find fall when my shadow reaches out over the waves to meet the moon. In days that shrink before I’m done with them. In this time of anticipation, relaxing and enjoying the change, and the wait.

Yes…I’m still pondering fall while all the neighbors are perfecting their Christmas decorations! 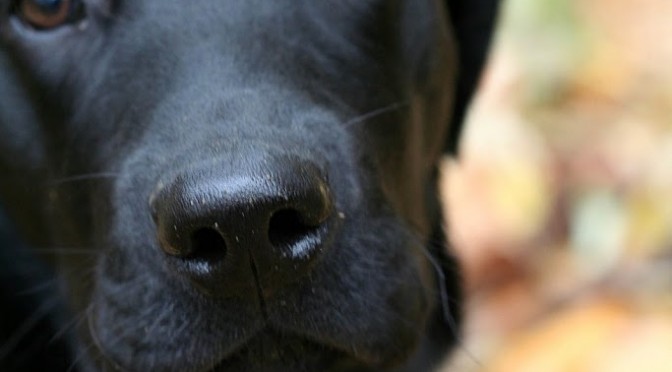 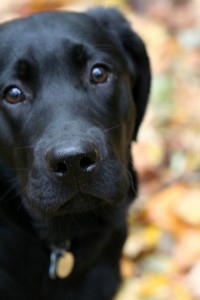 CRIME: STEALING THE HEARTS OF THE AMERICAN PUBLIC AND AN OCCASIONAL TABLE SCRAP OR TWO.

APPROACH WITH CAUTION: LOOKING INTO EYES MAY MELT YOUR HEART AND CAUSE ADDICTION. WATCH FOR TILTING HEAD (“THE LOOK”) YOU MUST LOOK AWAY!

ANYONE WITH INFORMATION PLEASE CALL THE PROPER AUTHORITIES