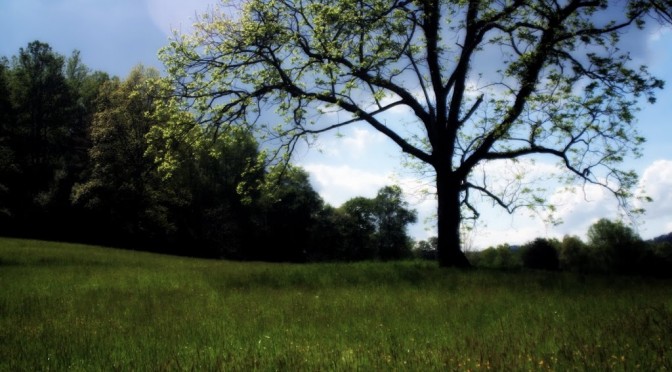 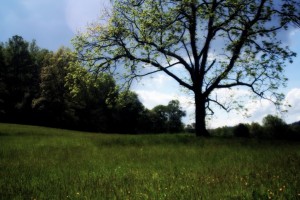 Us sing and dance, make faces and give flower bouquets, trying to be loved. You ever notice that trees do everything to git attention we do, except walk? ~Alice Walker, The Color Purple, 1982

This tree, somewhere in spring in West Virginia, was totally trying to be loved. 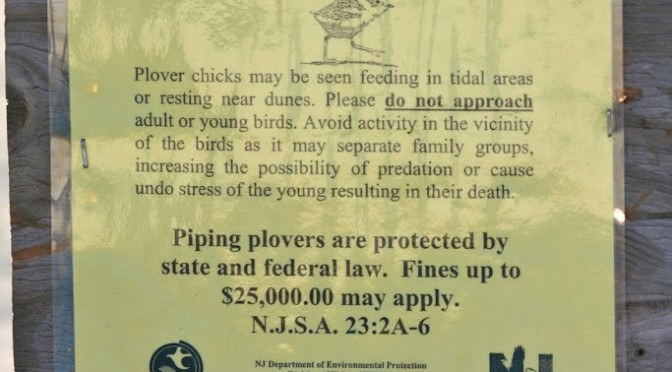 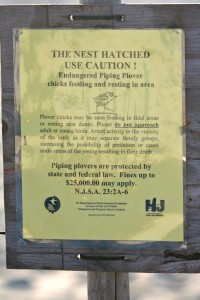 “Please watch where you step!” was the catchphrase for today, delivered with a smile to surfers and fishermen and young girls in tiny bikinis. Always the smile.

I’m in the PR business now, for Piping Plovers. Smiles are good PR*. 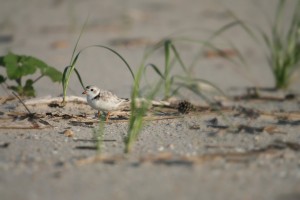 And there was plenty to smile about… it was a beautiful day, I got to see the sunrise over the ocean, and there were teeny-tiny Plovers afoot. (This is an adult, tho) 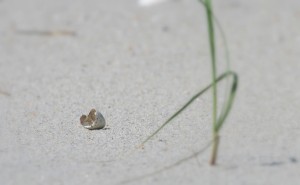 The Least Tern colony that the Plovers share was frantic today… I was dive-bombed at least a dozen times. That’s not such good PR, but it serves an important purpose.

At some point, midmorning, an adult Piping Plover carried and dropped this half eggshell near the ropes of the closed area. A khaki-colored egg flecked with brown that indicated #3 of 4 had hatched. 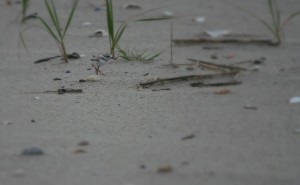 At sunset today, after 11+ hours of watching, a chick was finally within camera-shooting distance near the upper wrack line, #4 still hadn’t hatched, and I ended the best day at the beach in a good long while.

They are their own best PR… how could anyone resist such cuteness?!?

*One thing I love about the group that I’m volunteering with is that they’ve managed to get the general beach-going public on our side… they ask about how the birds are doing and help us to police the area… it feels as if the community is caring for these birds, which is very sweet. 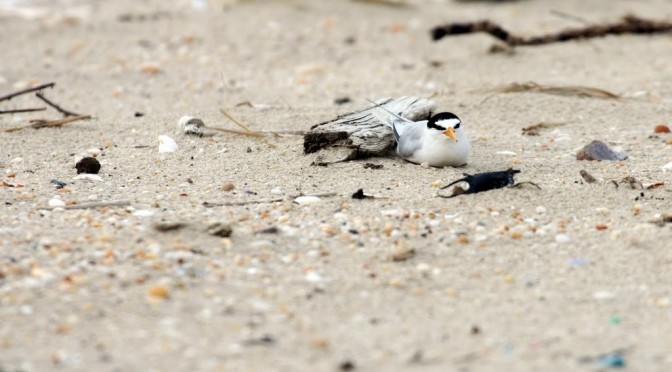 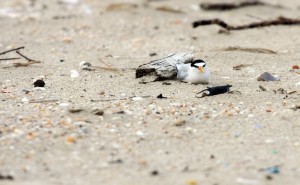 The terns have been on eggs for weeks now, in all their exposed locations along the shore. Their dedication is inspiring; no less so because of the challenges they face. 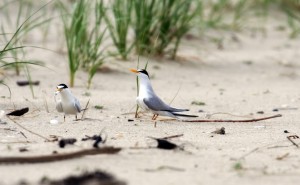 The opportunity to watch them, to babysit them – as I’ve come to call it lately – reveals the little dramas that fill their days. Least Terns seem prone to drama. They continue to court and strut, and flirt with fish, even after the eggs have been laid. 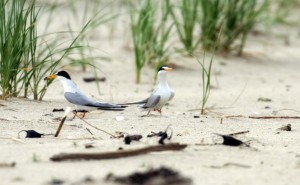 Sometimes they even seem to dance, making even a mundane nest exchange into theater for the careful observer. They’re aggressive and anxious, even with their mates. Neighbors are met with outright hostility for the slightest trespass. A gull or Fish Crow overhead sends the small colony into panicked flight. 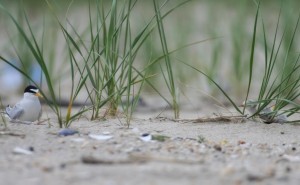 I’ve been trying for the past week or two to get a photo of a nest with eggs to share here, but haven’t accomplished that yet. The few looks I’ve had are too brief for a photo, but I can tell you this: the eggs are speckled with rock and sky and summer sands, and with the shadows woven by the beach grass that surrounds them.

Chicks have started to hatch in the last couple days and they are nearly as undetectable as the eggs they leave behind. Until they move, that is! There are two hidden in the tuft of beach grass to the right in the photo above. 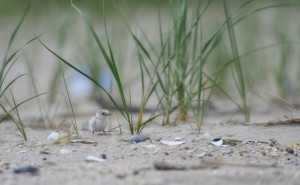 Unlike Piping Plovers who are off and running to feed themselves within hours, the Least Terns scuttle around in the dunes waiting to be fed. Theirs is a steep learning curve; before they can learn to fish, these babies must learn to fly.

Until then, they rely on their parents for food and their cryptic coloration to keep them safe. “I am not here” say the markings on their sand-colored bodies, the lines and patches magically drawing your eye away from them. No sooner do you catch sight of one, then, look away and it vanishes.

Please click on the pic above to make it larger. Let yourself fall in love a little… I did! 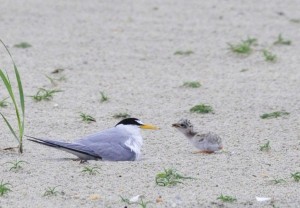 This pic isn’t mine, but I include it for the “Awww” factor.

I’ve had some really wonderful interactions with beach visitors so far… most are respectful of the closed area of the beach and actually interested in the birds. Fun! I’m looking forward to setting up the scope there one of these days so others can see them and share some of the love. 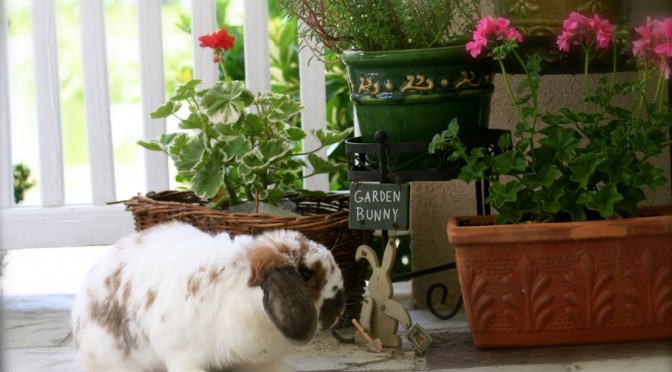 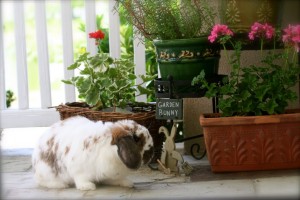 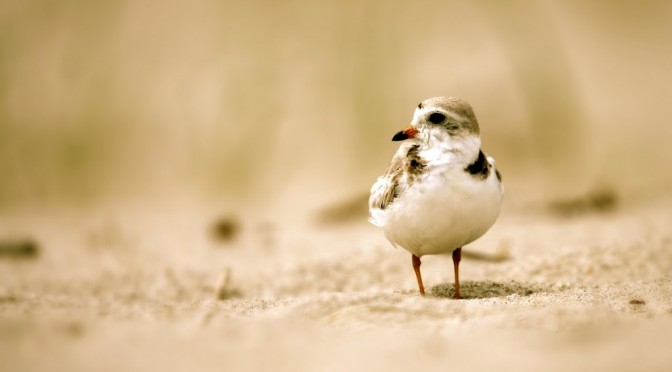 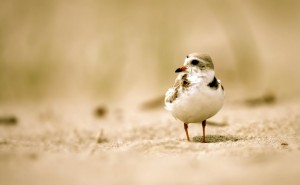 I caught sight of this Piping Plover late in the afternoon as she(?) stretched her legs and went off to feed in the surf; she’d just been relieved of nest-sitting duties by her mate. She preened her feathers some, stretched her wings and disappeared into the crowd of sun-worshipers.

Her eggs are expected to hatch in about 14 days! 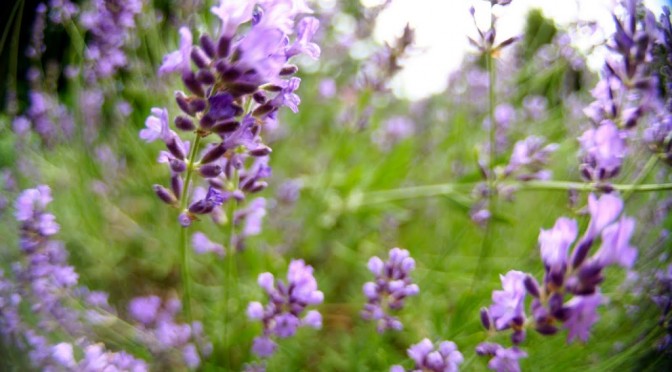 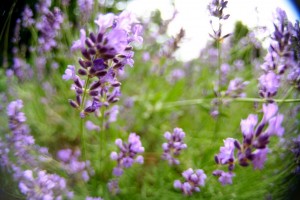 As the peak of summer bloom approaches, a foray into the local botanical garden offers something that feels like meditation. With the familiar heft of my camera in hand, I am occupied with wonder. There, just there, tucked into a sunny corner of the demonstration garden, a patch of lavender is busy with bees…

Last summer I was craving a Lensbaby; I will likely spend this summer making many mistakes in learning how to use its wide-angle and bendy-action to best effect. I hope you’ll enjoy seeing in a new way along with me. 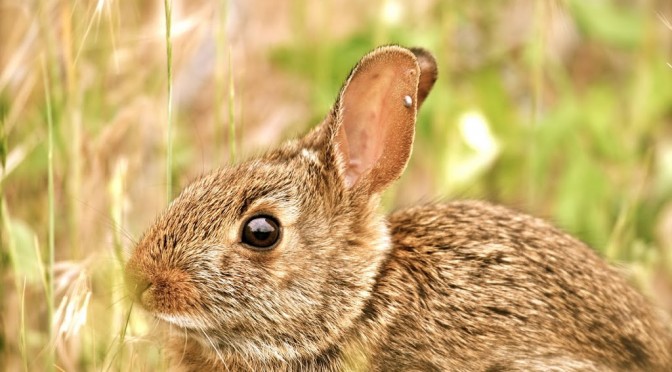 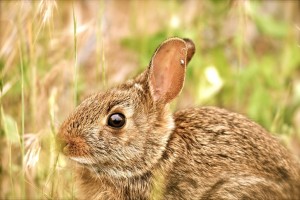 Suddenly, baby cottontails seem to be everywhere, as do ticks. 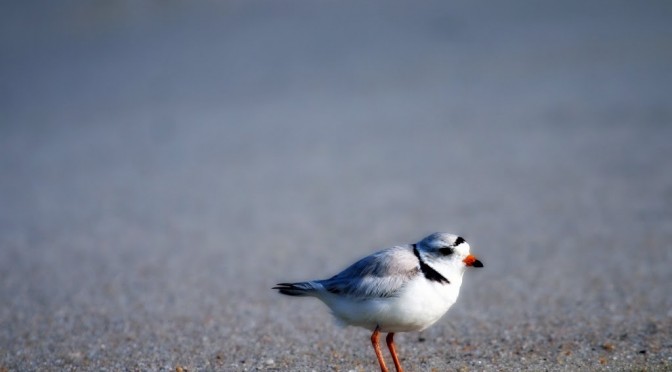 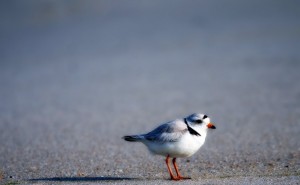 Until this past weekend, I was monitoring nothing beyond a space set aside for the hope of nesting Piping Plovers. A pair had made an attempt in late April, but hadn’t been seen since… I kept showing up anyway when I needed an ocean fix, but really had started to wonder if my time there made any sense.

These birds are notoriously hard to see and survive mostly by being invisible, so I kept telling myself that I just wasn’t looking hard enough, you know?

The Least Terns showed up and they were enough of a distraction for a while that I was able to feel like my presence there was important enough. But…

I heard just today that there are two nesting pairs with eggs(!) and those nests have been protected with exclosures…

So now the serious business begins… where’s my whistle? 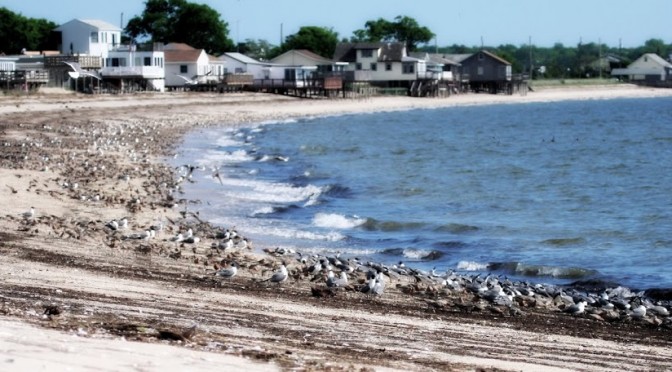 Reed’s Beach is a tiny bayshore community located about 10 miles north of Cape May. It and other similarly sleepy and bug-infested places along the shores of Delaware Bay find themselves, for a couple weeks each year in late May/early June, at the convergence of diverse and, often, conflicting interests. 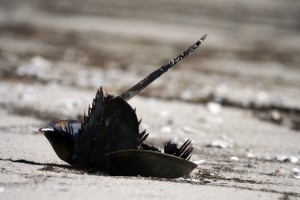 Firstly, there is the time-honored claim made by the horseshoe crab. The spring tides attract them to the calm bay shores to spawn and lay their eggs, by the billions.

Drawn specifically to the horseshoe crabs themselves, rather than their eggs, are commercial fishermen. Their value to the biomedical industry and as bait for eel and conch has led to a severe decline in the horseshoe crab population recently.

Next there are the birds that are lured to the bonanza of food presented by the spawning horseshoe crabs… all the seaside regulars show up to eat… gulls, grackles, shorebirds, crows… the beach is a living (and loud!) mosaic of birdlife. 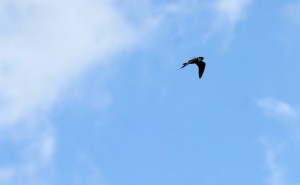 Our claim to this extravaganza, as birders, is a relatively recent one. Crabs and shorebirds were converging here on the Delaware Bay for any number of years without anyone really being aware of it. No sooner had the birding community come to know of it, than it almost disappeared. 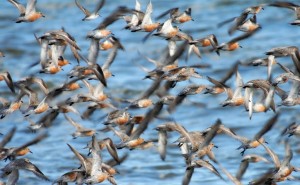 The star species in this spectacle of birds and crabs is the Red Knot. A robin-sized shorebird that undertakes a world-class migration and stops, midpoint, at Delaware Bay to refuel on its journey to the Arctic to breed.

Scientists and the birding community have watched their numbers plummet year after year. This year, on the lucky day we were there to witness it, some 5,000 had just arrived from Tierra del Fuego. 5,000 sounds like an impressive number until you understand that you’re looking at approx. half the Eastern population of a species.

Half of all the Red Knots in my world were spread there on the beach in front of us and still the shoreline looked mostly empty. A Peregrine appeared on the horizon and cut through the panicked flock, reducing it by one, perhaps. One less than half the population landed again, only to be panicked from their feeding, yet again, by a photographer or a fisherman intent on the jetty.

We all stake our claims…

One of the finest and most informative videos I’ve yet found is available at this link from PBS.