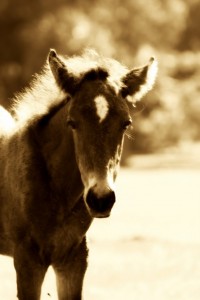 I’ve been calling them wild when, in fact, the horses of Cumberland Island are feral, as their ancestry includes horses that were once domesticated.

The population is not managed in any way, includes many bachelors and is left to roam freely in the salt marshes, among the abandoned estate grounds, within the glorious interdune meadows and along the beach itself.

They seemed tame and reconciled to the presence of people and their cameras.

It took all that I had in me not to reach out and stroke this foal’s sweet blaze. 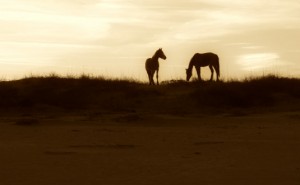 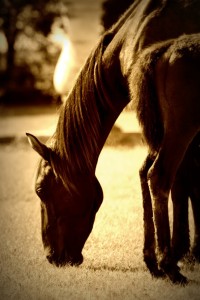 There are just a handful of places to find such horses, the islands of Chincoteague and Assateague being the best known, but these are said to be longer-backed and longer-legged than those to the north.

Never mind that the setting is otherwise gorgeous and pristine.

Some conservationists concern themselves with the environmental effects of their population on a sensitive ecosystem; a population largely without predators (save the occasional gator, I guess) and one which is considered non-native, while others are more concerned with the welfare of the horses themselves. Like gypsies, they wander in family groups, constantly on the move and prone to defend whatever territory they happen to be in at the moment.

None of that much mattered to me. They were beautiful. And photogenic.

4 thoughts on “The horses of Cumberland”