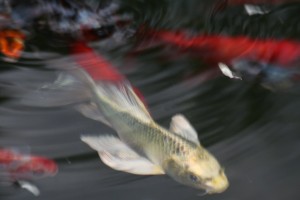 I gave in and let my husband add a few koi to our pond last week. I’d been adamant about not wanting koi because I’d read that they’ll tear up and root around in all of the pond plants. Yet, he convinced me to give it a go and so we did. I picked out a nicely-colored gold and yellow koi who has been hiding under the waterfall since we brought them home. This white butterfly koi in the photo, on the other hand, is a show-stealer! It swims on the surface showing off its lovely long fins and stealing your attention from the less fancy fish. Another of the koi seems to be slightly off-kilter or crazed; it swims along the bottom of the pond and twists itself against the creases in the liner and occasionaly jumps out of t 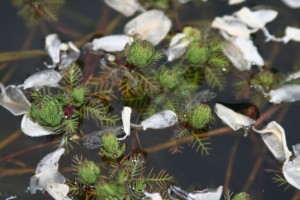 I mentioned earlier in the week that the locust trees are blooming. They’ve now started dropping petals everywhere; mostly in the pond, it seems. The effect is pretty, even if it does require a daily skimming with the net. Last year around Memorial Day I had lilies blooming, but this year it will be later because I only just replaced the plants that died over the winter. The plant at right is Parrot’s Feather, which the new fish seem to 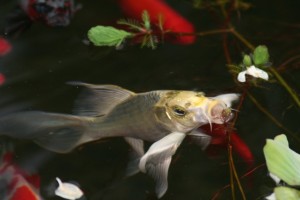 enjoy munching on. I bought a small plant to provide some cover for the fish, knowing that it will grow and spread by mid-summer. It’s an interesting plant in that the feathery foliage closes up late in the day.

We’ve also attracted another frog to the pond. At least I think this is a different one than the one we found when we did our spring clean-up. This one seems a bit smaller and greener than the last one. Late in the afternoon I find him peeping at me from between the rocks under the hosta plants and mint that line one side of the pond. I’m not sure what he’s finding to eat. I hope his presence isn’t the explanation for a few fish that have vanished in the last few weeks. Very seldom do I find a fish floating; 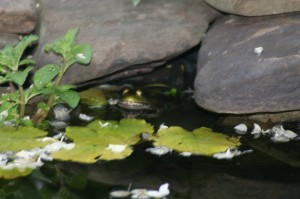 they just disappear. Last summer we had *issues* with a very large bullfrog eating our goldfish. I never would have believed his mouth big enough until one afternoon when my husband called me to the pond to see him with the fins of my husband’s favorite blue ryunkin hanging out of his mouth! We were able to remove the fish from his mouth (ahem!) and relocated the bullfrog to the farm pond around the corner. That poor fish was never the same again, and I found him floating a few weeks later. Anyway, I enjoy this guy’s company and hope he will behave himself here.