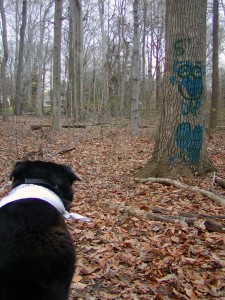 I wonder if all that eating I did yesterday has affected my ability to think straight and do anything besides lie on the couch like a slug. Maybe it was watching tv all afternoon that has numbed my brain. I have nothing but leftovers to offer up this evening.

The pic at left is a leftover from last weekend and a short walk with Buddy to the local woods. Not woods at all, really, as you’re never out of earshot of the road and anymore it seems more like the hangout of the local delinquents than the *nature trail* that it purports to be. The last time I visited with Buddy we came across a group of teenage boys with paintball guns. This time it was graffiti painted on the trees. A depressing sort of walk on all accounts. I put Buddy in the car and drove over to the development across from the woods because the walk there and back would’ve been too much for him these days. The screech-owl box that has been productive in the past had its top torn off – destroyed and unusable for roosting, even. The woods were wet and muddy and we both made a mess of the car on the way home. The one thing that made me smile was a father with a brood of kids in tow. The kids were racing along ahead of him, jumping through the fallen leaves and in and out of the puddles on the muddy trail. He was laughing and didn’t even scold his daughter for climbing up a low-limbed maple that overhangs the creek. They stopped to chat for a bit as Buddy and I had a rest on a fallen log. Buddy almost let the kids pet him before shying away behind me. Some things don’t change, no matter how old he gets.

Today I spent nearly an hour cleaning and medicating his ears. We’ve been struggling to get rid of an ear infection for more than a year – we do antibiotics and medicine twice a day and I think it’s gone away, but invariably it comes back worse than the last time, it seems. He’s been a trooper about it, but today I realized we need to do something more. My old man dog doesn’t deserve to be so uncomfortable all the time. Not to mention he wakes me up all night with his head-shaking. I’m scared about putting him under for the deep ear cleaning that our vet had recommended once before, but I don’t know what else to do to for him, short of cutting off the offending smelly ear!

Tomorrow I hope to get out in the fresh air and walk in the woods and clear out some of the cobwebs. There are lots of leftovers to walk off.