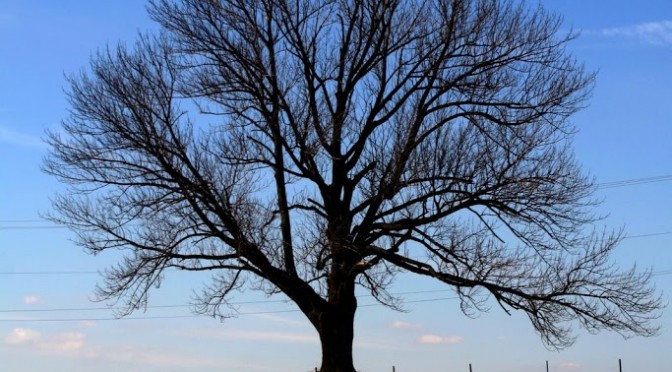 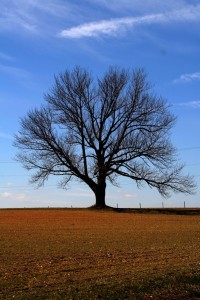 How about some Borland? We haven’t had any for a while now.

“Every garden should have a tree nearby. A tall tree with broad bole and spreading branches, preferably with branches that start well down the trunk or with a low crotch from which a boy might climb. A tree which spreads its roots where it springs from the earth, firm based and strong against the storms.

This is a tree for man as well as boy, the man who has climbed his trees and now can sit beneath them in understanding. For him those branches offer shade and hospitality when the sun has seared his neck and the garden is only half weeded. He can rest his back against that broad bole in Spring, when the spading is half done. Weeding and spading that younger hands once hastened through.

There is reassurance at the foot of such a tree, as well as rest. The years have added to its strength and stature. The wind, the rain, the ice and the blistering sun have all gone into the toughness of its fiber. Its roots strike deep into the soil and find sustenance in the old, old hills.

Youngsters must climb trees, to look out across a world that is misty with adventure. New horizons can be seen from tall trees when one is young. But the time comes when one can sit at the foot of such a tree and see even further than the eye could reach from its highest branch. There are times when one can see all the way to Tarawa and Anzio and Guadalcanal and Cassino.” – Hal Borland, Sundial of the Seasons

Borland adds the footnote for those of us too young to remember that Tarawa, Anzio, Guadalcanal, and Cassino were battlegrounds of WWII.

The tree in this photo is one that I pay particular attention to on the days that I teach, because I pass by it on my way to the college. This photo was taken in late March when I began taking a photo every few weeks to track its progress through the seasons. I missed visiting for a few weeks when the semester first ended and on my most recent visit I found it in full leaf. It grows in a picturesque setting, on a slight rise beside a dirt road – set apart from the farmhouse and outbuildings that share the property.