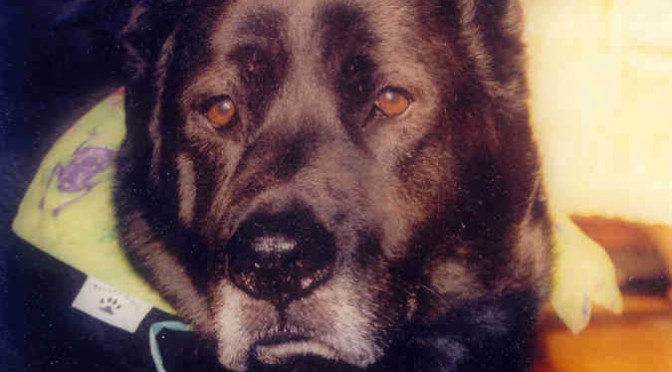 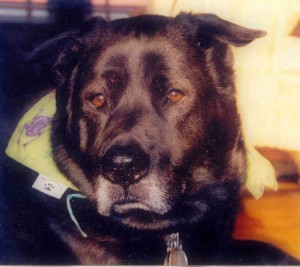 In the words of my vet, after I apologized for making him go over the necropsy results for the second time in as many hours, “It’s hard to lose a dog that’s been with you for so many years.” Yes it is, but would it be any easier if it were two years instead of twelve?

My old man dog Buddy died today. Just like that. He was a little off this morning and wouldn’t settle or eat his treats. He was sleeping alone in the living room when we woke up this morning and was hard to rouse. Nothing unusual, really. We were both concerned enough that my husband stopped home at lunch time to check on him and found him dead. Dead in front of the door so that it couldn’t be opened and my husband had to climb in through the kitchen window to get in the house.

My husband brought him to the vet for a necropsy so that we might understand what happened to him. The vet found that he had hemangiosarcoma; an aggressive cancer of the blood vessels and a tumor on his heart. The tumor had ruptured and caused his heart to stop. The vet said that he felt no pain, just tired and weak, and likely collapsed and just went peacefully to sleep.

I had fretted over him getting older and worried that we might have to put him to sleep one day when he couldn’t walk any longer. I dreaded that, but never expected anything like this. I have to think that a kindness was done for us – a disease we didn’t know about, couldn’t worry over and couldn’t even have done anything about had we known. No guilt, no what-ifs. I’m just so thankful I took the time this morning before leaving to hold his head in my hand and tell him that he was a good boy and that I loved him. A lot of mornings I didn’t take the time for that, but this morning I did.

“What is life? It is the flash of a firefly in the night. It is the breath of a buffalo in the winter time. It is the little shadow which runs across the grass and loses itself in the sunset.“
–Crowfoot, Chief of the Blackfeet Nation