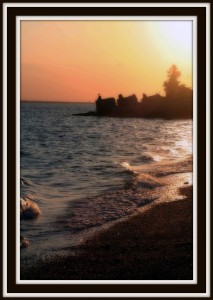 The sea, once it casts its spell, holds one in its net of wonder forever. — Jacques Cousteau

This weekend marks the ‘official’ end of the summer season here at the Jersey Shore; after Monday, the beaches will be free: free of outsiders and free of daily fees. People begin to flee. They leave the summer rentals towing their sailboats behind them. Birds flee; shorebirds depart as migrating ducks begin to arrive, egrets find maps in their pursuit of summer to the south.

We breath a sigh of relief because the beach can be ours again; ours for a quiet sunset walk along the bay or a day spent oceanside soaking up the September sun. After Labor Day is the best time here. Warm days and cool nights.

Horseshoe Cove at Sandy Hook is one of my favorite places to watch the sunset over the bay. I have hundreds of sunset pictures from there. That trio of similar forms silhouetted against the setting sun is what remains of one of the many coastal defense fortifications from WWI that dot Sandy Hook. In summer, there’s always a tern or two perched there and some cormorants or gulls. Off in the far distance at the horizon is the pier at Naval Weapons Station Earle. There’s often a battleship there on the bay.