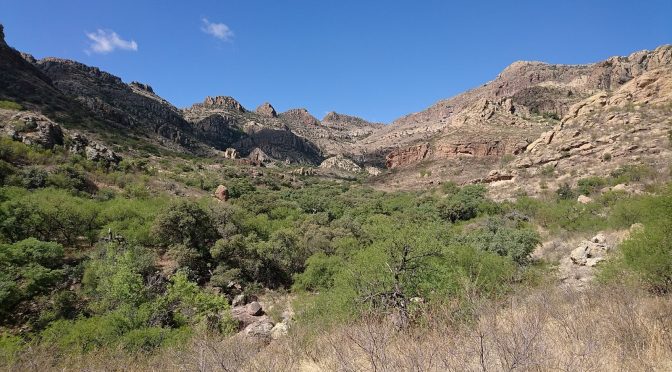 Our first full day in AZ started ridiculously early. We had a 45 minute drive to meet our birding group, so we were up well before the sun… at 3:45 am.  Ugh! Our group met at 5:15 and drove south from Tucson towards the Tumacacori Mountains and what was promised as a “secluded canyon birding tour”.

Rock Corral Canyon is fabulously remote. It’s reached via a short, and very rough dirt/boulder-strewn road that leads west from I-19 between Tucson and Nogales. Luckily, we were able to carpool with someone who had a high clearance 4WD vehicle and so were able to enjoy the views along the way. In the middle of the thorny-scrub and ocotillos, we spotted this Antelope Jackrabbit working very hard at being invisible. 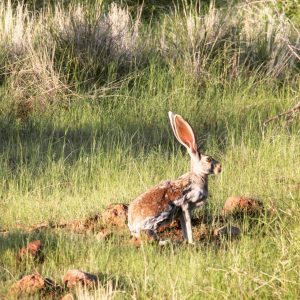 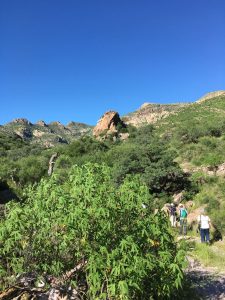 Not having grown up around mountains or the desert, I had no real idea of what birding in the canyons of Arizona would be like. My first impression was that it was much more green than I had expected, but I guess that even a small change in elevation gives way to a cooler and moister climate for plants to grown in. It being monsoon season meant that there was water flowing in the wash where we had to walk which also meant slow and careful stepping on the rocky trail. 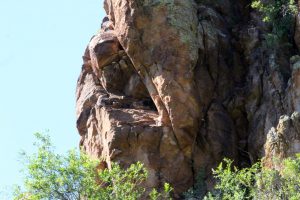 We got one of Jay’s target birds here – can you see it?

I’m not certain that I ever really got a nice look at this Canyon Wren because it was hiding in the shadows of the rock wall, but its song was lovely!

Have a listen to the Canyon Wren’s song here at the Cornell Lab site.

We also saw a couple new tanagers there – Western and Hepatic – and quite a few Varied Buntings and some lifer vireos that I don’t even remember. Yikes! The most difficult thing about that first day was that everything was new – all the plants, animals, birds, sounds, etc. in a new environment were almost overwhelming – so I mostly tried to focus on enjoying myself in the unfamiliar surroundings. We spent a couple hours exploring until the flowing water and necessary climbing made us have to turn back… there was lemonade and cookies before we headed out to our next stop.