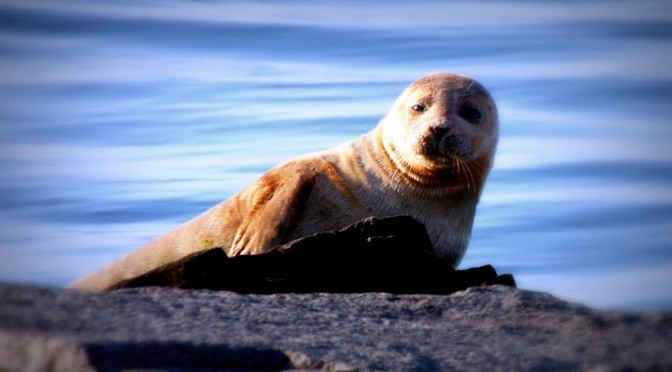 A return trip today to Barnegat Light with the Monmouth County Audubon Society was graced by many of the same species as last week’s visit, plus a new one! 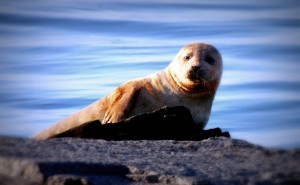 This harbor seal had hauled itself up onto the rocks of a small jetty behind the lighthouse to rest and soak up some sun, much to our delight. They’re fairly common here in winter, but this is the closest I’ve ever seen one. They have small rounded heads and whiskered snouts, but it’s their huge and soulful eyes that establish the resemblance with a more blubbery version of man’s best friend. 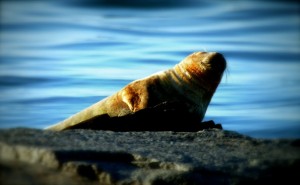 It was really sweet to watch it nearly tipping off the rocks as it napped! The seal seemed well aware of, yet unconcerned with the group of admirers that had gathered at the base of the lighthouse to watch it.

Many thanks to Steve for letting me use his big lens for these closer-up views.

High tide and a heavy surf had rearranged the sea ducks and shorebirds in new patterns. The jetty was impossibly dangerous today… so hardly any harlequins were within view, but the crashing waves beyond the jetty were black with ducks!

There were big numbers of long-tails and lots of scoters (black and surf) close within the inlet, disappearing and reappearing behind the swells… a real treat! I also saw quite a few common eiders looking just like the field guides say they should… sweet!

(Of course there’s no pictures… I wasn’t about to climb up on the jetty and get soaking wet or worse.) 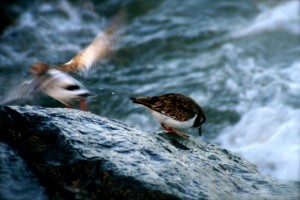 The purple sandpipers, dunlin, ruddy turnstones and a lone sanderling were mostly feeding on the lee side of the jetty… out of the wind and the crashing waves. They’re all so inconspicuous somehow, looking like nothing more than jetty rock, until you realize that the rocks are moving and alive with birds.

I often wonder why in the world I do this… why I stand out in the cold until my hands and lips are numb… just to see birds that I’ve seen any number of times before in much less awful conditions?

It’s mostly ritual, I think, like waiting for woodcock in an early spring dusk or estimating the number of swallows that might rise from the phragmites at North Pond on a late summer dawn.

What’s not often mentioned among birders is the time spent scanning the horizon, that distant magic place where sky and sea or sky and land converge to ignite the imagination. The time spent looking at nothing. You have to be patient when you look there. You might not see anything new… or see anything at all, but you have to look and wait, just in case.

Some people don’t ever want to look into that distance. Some people won’t tolerate the discomfort of it.

Sometimes the best thing I find while scanning that distance is inside me, anyway.

7 thoughts on “Sea dog, jetty birds and the distance”