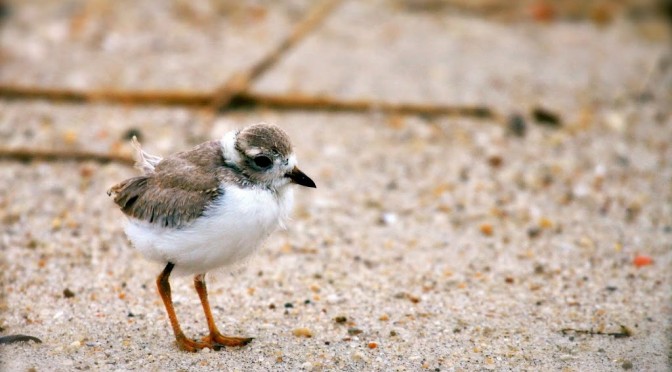 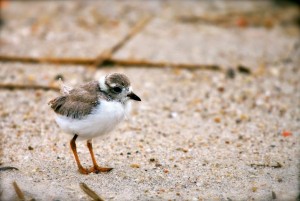 There was an evening last week, before the heat wave descended, when the beach was cool and thick with fog, like it is when the Piping Plovers first return in March.

I had to search hard to find my little charges, so completely gray was their world; the sky, sea and sand blending into nothingness.

I’ve come to know these birds for the little flashes of light that precede them. Their movement, on the periphery of my awareness, is the only thing that gives them away.

They seemed suddenly fearful that evening, aware of my presence and the camera pointed their way. They approached, hesitant in their feeding along the waterline, and skittered past me quickly.

This, too, is a part of their growing up, I guess.

Mama Plover has been gone for almost two weeks now, leaving them in the care of their father. He is even more vigilant since, calling the alarm at my approach and distracting me away from his chicks with a game of hide and seek in the sand.

A part of me wants to play that game with him, to see just where, exactly, he might distract me away to…

Instead I step back and stay away and try to remain separate. These four chicks are not mine. I’m not totally in love with them. I will not miss them, already, before they’ve learned to fly and are gone as the goldenrod sweeps over the dunes.

I will not cry at their growing up.

3 thoughts on “I will not cry”