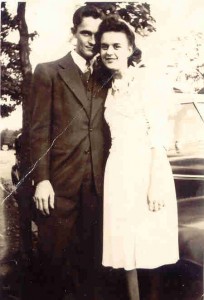 My husband’s parents were married on October 21, 1945. She was born and raised in NJ (and has lived most of her life down the street from the childhood home that she was born in). He was born in California, but grew up in Tennessee. She was around 17 years old when married, he had already been to war and was stationed at the nearby army base on his return. They met at the roller-skating rink. This is a scan of the only picture from their wedding day – her dress was light blue. They honeymooned in Newark, NJ. We gave them a 50th wedding anniversary party in 1995, but my father-in-law passed away before they celebrated their 58th.