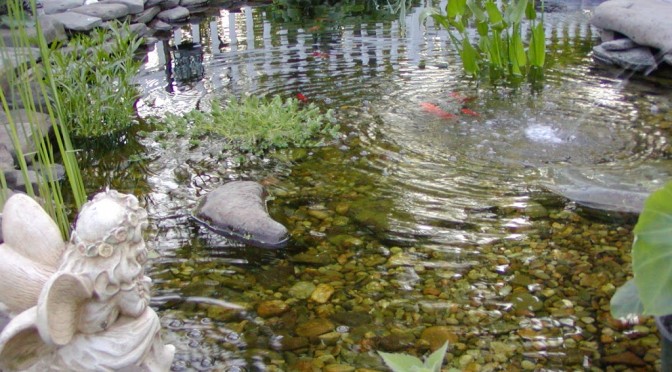 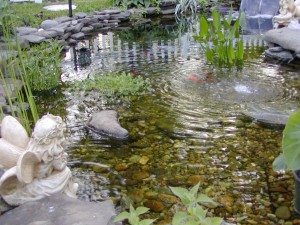 Mary had asked for some pond pics and we’ve done a bit of work lately so that I’m not so embarrassed to share photos. The filter’s been running for a few weeks after the major cleanout we did and the 20 or so fish are back in the pond. This past weekend we finally bought a few plants and that has made a world of difference in how the pond looks! We bought some parrot’s feather and a sensitive fern, some rushes, and a pickerel plant, and some elephant ears. We also bought a few of the *floaters* to offer some shade until we buy any waterlilies. The floating heart that grew last year as a volunteer has started sending out shoots and the mint that grows in the rocks is already out of control! This year I would really like to work on planting the edges of the pond; other than a few hostas, daylilies, and some monarda, nothing much that I’ve planted in the past has been able to survive. The pond is in full sun for most of the day and those rocks really heat up! I haven’t spotted the frog since we did the cleanout, but I’m sure he’s lurking there somewhere.