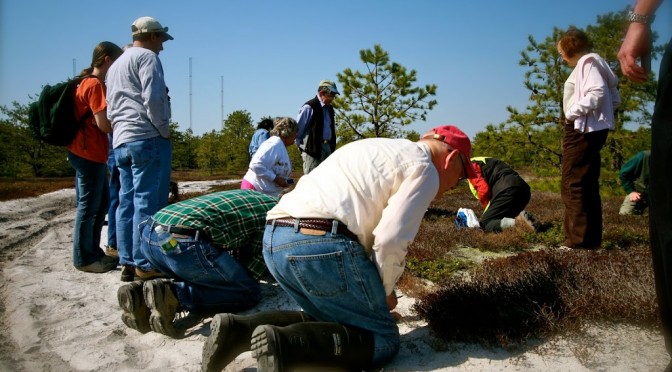 You have to kind of wonder when, on a trip for the earliest blooming flower in the Pine Barrens, you step out of the car to find most everyone on their knees in the sand, peering into the vegetation with hand lenses or macro lenses.

I wondered just what bag of goods the Pinelands Preservation Alliance (via MevetS) had sold me on this trip… as if the setting on a bombing range weren’t crazy enough! 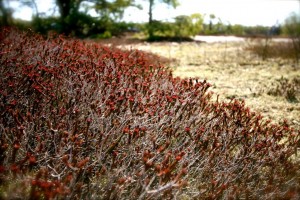 These tiny plants and their diminutive *flowers* were our focus.

My focus on them was never very good, by the way, because they’re so darn tiny!

Broom Crowberry is a very special plant, not only because it’s among the earliest of bloomers, but also because it’s quite rare outside of the pine plains habitat. Plant geeks seem to love it, despite its drab appearance. I was sort of less-than-excited about it cause I wanted SPRING! and PINK! and FLASHY! but whatever.

This attitude is probably exactly why I need to go on these trips… don’t you think?

I love the Pine Barrens, but its beauty is very subtle. It doesn’t give away its treasures easily, I know. You have to drive and then hike past thousands of pitch pines and scrub oaks, get lost countless times on sugar sand roads that all look the same, sweat and freeze and question your sanity and then, maybe, she shows you something wonderful for your efforts. 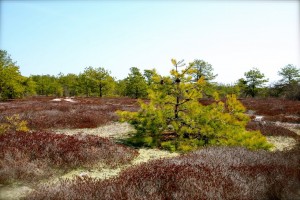 Where it grows well, Broom Crowberry grows in great mats across the sand… it likes to be out in the open under the sun and flourishes, according to plant geeks who study these things, in areas of disturbance… hence our visit to the bombing range (and the area near some power lines where these photos were taken). Like so many Pine Barrens endemics, it’s well-adapted to fire… in areas that aren’t regularly burned (or bombed!) it’s shaded out by tall trees or shrubs. 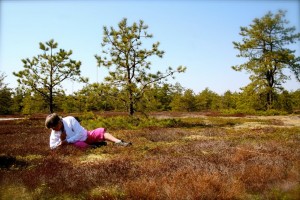 We learned that botanists (among them Alexander Wilson of ornithological fame) traveled from Philadelphia to the Pinelands to find these plants and Thoreau described Broom Crowberry as “a soft, springy bed for the wayfarer”.

5 thoughts on “For the wayfarer”