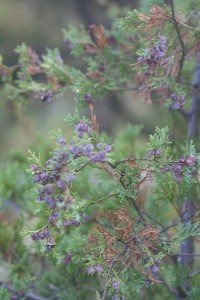 The Eastern Red Cedar is a vital source of shelter for birds and mammals in winter and the popularity of its berries is evidenced by its ability to quickly populate abandoned fields and disturbed areas. Berries are borne on female plants; the males have tiny cones that spread pollen in late winter. Due to its resistance to rot, the wood is often used for fenceposts or in furniture making. American Indians use the wood for flute-making and LauraO at Natural Notes 3 prefers them for her Christmas Tree.

Laura’s mention of flute-making in that post sparked my curiosity and I found this American Indian story to explain why cedars are prized for flute-making. I don’t know that I’ve ever heard the sound of one, but this wonderful story gives me an idea of what it might be like. It’s long, but like all good stories, worth the read.

“The Legend of the Flute “

Well, you know our flutes, you’ve heard their sounds and seen how beautifully they are made. That flute of ours, the siyotanka, is for only one kind of music, love music. In the old days the men would sit by themselves, maybe lean hidden, unseen, against a tree in the dark of night. They would make up their own special tunes, their courting songs.

We Indians are shy. Even if he was a warrior who had already counted coup on a enemy, a young man might hardly screw up courage enough to talk to a nice-looking winchinchala — a girl he was in love with. Also, there was no place where a young man and a girl could be alone inside the village. The family tipi was always crowded with people. And naturally, you couldn’t just walk out of the village hand in hand with your girl, even if hand holding had been one of our customs, which it wasn’t. Out there in the tall grass and sagebrush you could be gored by a buffalo, clawed by a grizzly, or tomahawked by a Pawnee, or you could run into the Mila Hanska, the Long Knives, namely the U.S. Cavalry.

The only chance you had to meet your winchinchala was to wait for her at daybreak when the women went to the river or brook with their skin bags to get water. When that girl you had your eye on finally came down to the water trail, you popped up from behind some bush and stood so she could see you.

And that was about all you could do to show her that you were interested. Standing there grinning, looking at your moccasins, scratching your ear, maybe.

The winchinchala didn’t do much either, except get red in the face, giggle, maybe throw a wild turnip at you. If she liked you, the only way she would let you know was to take her time filling her water bag and peek at you a few times over her shoulder.

So the flutes did all the talking. At night, lying on her buffalo robe in her parents tipi, the girl would hear that moaning, crying sound of the siyotanka. By the way it was played, she would know that it was her lover who was out there someplace. And if the Elk Medicine was very strong in him and her, maybe she would sneak out to follow that sound and meet him without anybody noticing it.

The flute is always made of cedarwood. In the shape it describes the long neck and head of a bird with an open beak. The sound comes out of the beak, and that’s where the legend comes in, the legend of how the Lakota people acquired the flute.

Once many generations ago, the people had drums, gourd rattles, and bull-roarers, but no flutes. At that long-ago time a young man went out to hunt. Meat was scarce, and the people in his camp were hungry. He found the tracks of an Elk and followed them for a long time. The Elk, wise and swift, is the one who owns the love charm. If a man possesses Elk Medicine, the girl he likes can’t help sleeping with him. He will also be a lucky hunter. This young man I’m talking about had no Elk Medicine. After many hours he finally sighted his game. He was skilled with bow and arrows, and had a fine new bow and a quiver full of straight, well-feathered, flint-tipped arrows. Yet the Elk always managed to stay just out of range, leading him on and on. The young man was so intent on following his prey that he hardly noticed where he went.

When night came, he found himself deep inside a thick forest. The tracks had disappeared and so had the Elk, and there was no moon. He realized that he was lost and that it was too dark to find his way out. Luckily he came upon a stream with cool, clear water. And he had been careful enough to bring a hide bag of wasna, dried meat pounded with berries and kidney fat, strong food that will keep a man going for a few days. After he had drunk and eaten, he rolled himself into his fur robe, propped his back against a tree, and tried to rest. But he couldn’t sleep, the forest was full of strange noises, and the cries of night animals, the hooting owls, the groaning of trees in the wind. It was as if he heard these sounds for the first time.

Suddenly there was a entirely new sound, of a kind neither he nor anyone else had ever heard before. It was mournful and ghost like. It made him afraid, so that he drew his robe tightly about himself and reached for his bow to make sure that it was properly strung. On the other hand, the sound was like a song, sad but beautiful, full of love, hope, and yearning. Then before he knew it, he was asleep. He dreamed that the bird called wagnuka, the redheaded woodpecker, appeared singing the strangely beautiful song and telling him, “Follow me and I will teach you.”

When the hunter awoke, the sun was already high. On a branch of the tree against which he was leaning, he saw a redheaded woodpecker. The bird flew away to another tree, and another, but never very far, looking back all the time at the young man as if to say, “Come on!” Then once more he heard that wonderful song, and his heart yearned to find the singer. Flying toward the sound, leading the hunter, the bird flitted through the leaves, while its bright red top made it easy to follow. At last it lighted on a cedar tree and began hammering on a branch, making a noise like the fast beating of a small drum. Suddenly there was a gust of wind, and again the hunter heard that beautiful sound right above him.

Then he discovered that the song came from the dead branch that the woodpecker was tapping his beak. He realized also that it was the wind which made the sound as it whistled through the hole the bird had drilled.

“Kola, friend,” said the hunter, “let me take this branch home. You can make yourself another.”

He took the branch, a hollow piece of wood full of woodpecker holes that was about the length of his forearm. He walked back to his village bringing no meat, but happy all the same.

In his tipi the young man tried to make the branch sing for him. He blew on it, he waves it around, no sound came. It made him sad, he wanted so much to hear that wonderful new sound. He purified himself in the sweat lodge and climbed to the top of a lonely hill. There, resting with his back against a large rock, he fasted, going without food or water for four days and nights, crying for a vision which would tell him how to make the branch sing. In the middle of the fourth night, wagnuka, the bird with the bright red top, appeared, saying, “Watch me,” turning himself into a man, showing the hunter how to make the branch sing, saying again and again, “Watch this, now.” And in his dream the young man watched and observed very carefully.

When he awoke, he found a cedar tree. He broke off a branch and, working many hours, hollowed it out with a bowstring drill, just as he had seen the woodpecker do in his dream. He whittled the branch into the shape of the birds with a long neck and a open beak. He painted the top of the birds head with washasha, the sacred red color. He prayed. He smoked the branch up with incense of burning sage, cedar, and sweet grass. He fingered the holes as he had seen the man-bird do in his vision, meanwhile blowing softly into the mouthpiece. All at once there was the song, ghost like and beautiful beyond words drifting all the way to the village, where the people were astounded and joyful to hear it. With the help of the wind and the woodpecker, the young man had brought them the first flute.

14 thoughts on “A story of cedars and flutes”